The documentary film, El duende y misterio del flamenco, which made in 1952 by Edgar Neville, is an invaluable record of flamenco in the mid-twentieth century, as it was made by someone who understood and respected flamenco, and who aimed to preserve it.

Edgar Neville (1899–1967) was born in Madrid. He was a writer, a playwright and a painter. He completely his studies in law in Granada and while he was there spent time Federico García Lorca and Manuel de Falla, sharing their afición for flamenco, and many other artists; he was a member of the Generation of ‘27. Edgar Neville was one of the supporters of the Concurso de Cante Jondo held in Granada in 1922.

Edgar Neville’s views on: What is flamenco? 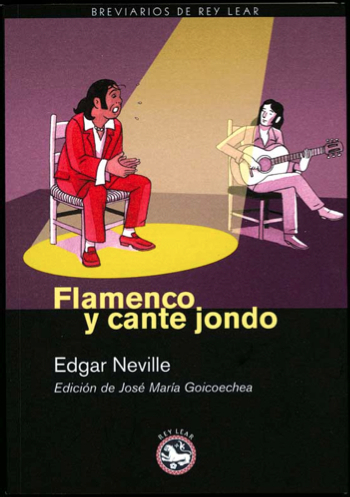 Edgar Neville wrote a book called Flamenco y cante jondo, which was originally published in 1963; it has now been re-edited with an introduction by José María Goicoechea.

He spent a number of years in Los Angeles, working in film there and was good friends with Charlie Chaplin, from whom he learned the art of film-making.

On 10 September 2011, RTVE broadcast a programme with Edgar Neville’s son Jimmy, speaking about him. This is still available for listening to and for downloading as a podcast:

The interview of Jimmy Neville is from a few years earlier, as he actually died in March 2005; his own son, who has been named after his grandfather, Edgar, speaks at the end of the programme also and mentions that he is in the process of editing his grandfather’s diaries from the 1940s until his death in 1967, preparing them for publication. He is the VI Conde de Berlanga de Duero.