The flamenco tablao, Los Canasteros, was opened by flamenco singer Manolo Caracol in 1963. Some of flamenco’s most famous artists performed there, such as Melchor de Marchena, Paco Cepero, not to mention, Manolo Caracol himself and more recently Ketama. 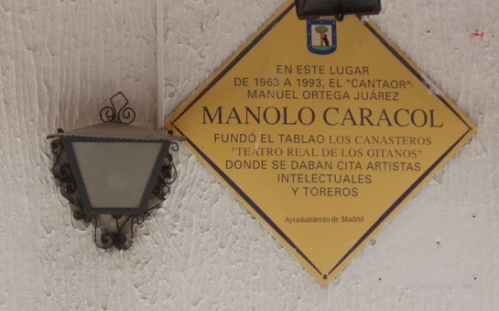 For those who might be missing the flamenco guitarist Enrique de Melchor, you will be pleased to see him introduce this fine documentary on Los Canasteros, directed by Miguel Espín for TVE Televisión Española in its Tesoros del Flamenco series, which were broadcast in 1996.

You might find the opening music slightly incongruous – Bach’s Toccata and Fugue in D minor on pipe organ – however, the flamenco pianist, Arturo Pavón, who often accompanied Manolo Caracol and who appears in this documentary, is quoted as having said that, for him, this work by Bach, sounds very flamenco. Arturo Pavón is the nephew of the flamenco singers La Niña de los Peines and Tomás Pavón.

Enrique de Melchor tells us that he was 15 years old when he first came to the tablao Los Canasteros in 1966 and would listen behind the curtain; it had already been open three years and his father, the guitarist Melchor de Marchena, played there often, accompanying Manolo Caracol, among others.

Manolo Caracol, affectionately called Enrique ‘sobrino’ and although he never accompanied Manolo Caracol in public, once the audience left, Enrique would play for him, with shaking hands and a dry throat. Here Enrique plays a Farruca on guitar solo.

A young Camarón de la Isla, dressed in a suit and tie, gives a short introduction to the fandango ‘caracolero’, which he sings.

Pansequito sings a tango in the distinctive style of Caracol, accompanied by Pepe Habichuela on the guitar.

There is a short interview with Manolo Caracol about the establishing of his tablao and then he sings a zambra, with his suit jacket thrown over one shoulder, like a bullfighter’s cape. He is accompanied by Arturo Pavón on a grand piano and Melchor de Marchena on guitar. It’s all wonderful but this is extra wonderful!!

The programme ends with Manuela Carrasco dancing a bulerías with Juan Villar singing.