This morning the Mayor of San Fernando, José Loaiza, called the press to the house where the flamenco cantaor Camarón de la Isla (José Monje Cruz) was born – on 5 December 1950 – in Calle del Carmen. The house, presently in ruins, will be bought by the Ayuntamiento and converted into a museum. 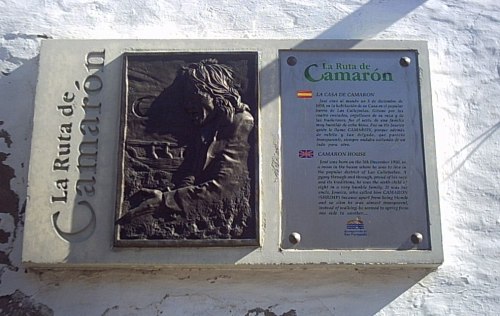 The Ruta de Camarón is already an established tourist pilgrimage, created by the Ayuntamiento of San Fernando in Cádiz in collaboration with the Monje family, which starts at the Casa de Camarón, 29 Calle de Carmen, where he lived with his parents and 8 brothers and sisters.

The next stop is La Fragua – the blacksmith’s workshop of Camarón’s father, Luis Monje, at 21 Calle Amargura. Camarón’s brother still lives there and generously tells stories of Camarón’s life to visitors.

Venta de Vargas is the restaurant where Camarón used to sing from the age of 8 and where he heard some of the most celebrated flamenco singers, such as La Niña de la Pienes and Manolo Caracol.

The Mausoleum of Camarón is in the municipal cemetery. Here people gather daily to pay their respects and adorn the mausoleum with flowers