Embrujo (bewitched) is a black & white film dating from 1947. It wasn’t well received in its day by the critics, and I hope you will excuse my indulgence, but I have to say that I enjoy watching the flamenco singer Manolo Caracol from Seville with his sad, deep set eyes, as he suffers from the unrequited love of Lola Flores.

The story line of Embrujo, which was directed by Carlos Serrano de Osma, is very weak but the close-ups of Manolo Caracol and the occasional opportunity of hearing him sing in the film, made it worthwhile for me!

There was very little dancing from Lola Flores and only a little singing, but I was interested to see how she moved her hands and wrists, which is a very individual thing always.

During the film, there was a ‘flamenco show’ of the time and I also found that interesting to compare with the flamenco shows of today, looking at the costumes, the dance, the orchestration and so on.

Manolo Caracol (Manolo Ortega Juárez) was one of the greatest cantaors in the history of flamenco. His genius was first appreciated when he won the first prize in the famous competition, the Concorso de Cante Jondo, organised by the Spanish composer Manuel de Falla, in collaboration other musicians and artists of the time, including the Spanish poet Federico García Lorca and the Basque painter Ignacio Zuloaga.

The Concorso de Cante Jondo was held on Corpus Christi, 13 and 14 June, 1922 in Granada. Manolo Caracol was only 12 years of age at the time. Antonio Chacón (1869–1929), another great cantaor, was head of the jury at the competition. Manolo Caracol’s professional career began after winning that competition.

He was born in Seville, close to the Alameda de Hércules, where they now have a statue in his honour. 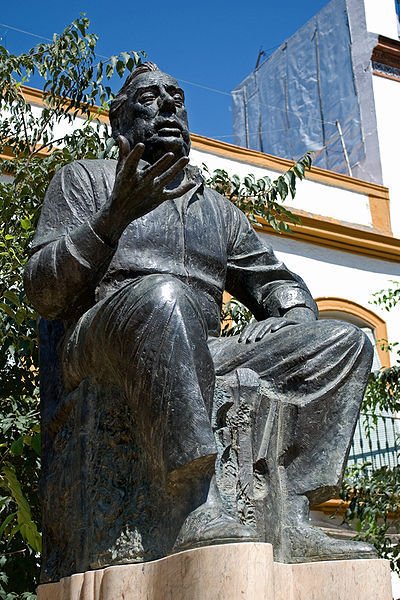