I am still thinking about the Las Migas recording that is about to arrive and having dug out my Estrella Morente recording yesterday to hear her version of Los Cuatro Muleros again, I am moving onto another track on the Las Migas CD that caught my eye, that is, La Tarara. That is another favourite of mine and before I hear the Las Migas version, up until now my favourite version has been that of Radio Tarifa.

This time my dash to the CD shelf has not been so successful. I can find three of Radio Tarifa’s other recordings: Rumba Argelina, Cruzando el Río and Fiebre, but La Tarara is the opening track on their recording called Temporal, and it’s not there!

Radio Tarifa gave their last concert on 11 November 2006 in Barcelona. They formed their group in the late 1980s with percussionist Faín Dueñas, singer Benjamin Escoriza and flautist Vincent Molino as the core members of the group. It wasn’t until 1993 that they released their first recording called Rumba Argelina with an eclectic mix of Spanish, Arabic, Flamenco and medieval music styles and an equally interesting mix of instruments from many different cultures, played by an impressive selection of guest artists.

Rumba Argelina was a great success and when I interviewed them in November 1997 for Flamenco International magazine after their London performance, they were just about to make their New York debut. By then they had released their second album called Temporal, which has their very rhythmic version of La Tarara on it, with very Arabic sounding instrumental interludes between the verses. 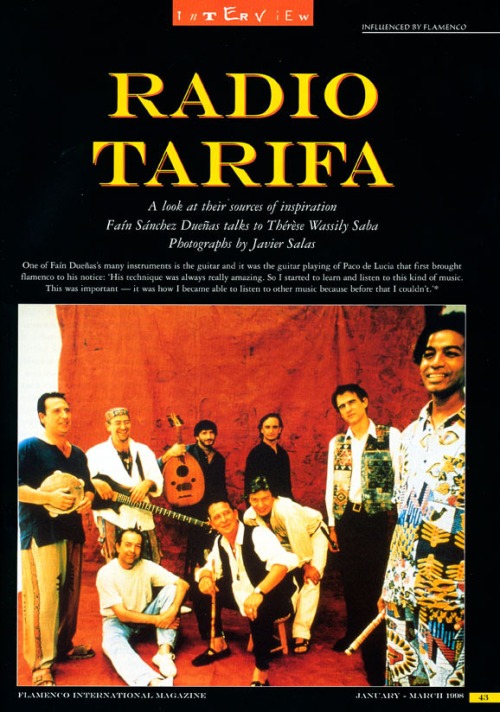 La Leyenda del Tiempo (Philips, 1979) was a ground-breaking recording which marked the start of Nuevo Flamenco. It was produced by Ricardo Pachón, who also did the arrangement of La Tarara on the recording.

Radio Tarifa’s version has the same lyrics as Camarón’s version, although Camarón didn’t always perform it the same way; sometimes in between the rhythmic verse, he sings slow, flamenco freestyle verses – a taranta. Camarón’s singing is wonderful but the accompaniment isn’t always the sort of atmosphere that I want – sometimes there is too much jazz in there and sometimes electric and electronic instruments.