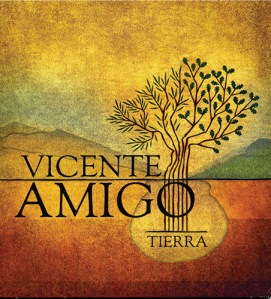 Tierra has a fresh flamenco twist as he recorded it with musicians from Dire Straits and the Scottish band called Capercaillie at Mark Knopfler’s British Grove Studios in London.

All the pieces have been composed by Vicente Amigo and the other musicians on the recording are Mike McGoldrick on tin whistle and Uilleann pipes, John McCusker  on fiddle, Guy Fletcher on piano and organ, Donald Shaw on accordion and Ewen Vernal on double bass. The result is flamenco with a very strong mix of Celtic music.

CÓRDOBA on 21 September 2013 at the Teatro de la Axarquia

LONDON on 24 September 2013 at the Union Chapel

MUNICH on 5 December 2013 at Prinzregetentheater

VIENNA on 15 December 2013 at Konzerthaus

Vicente Amigo is featured in the September 2013 issue of Classical Guitar magazine where he speaks to Thérèse Wassily Saba about his new recording. 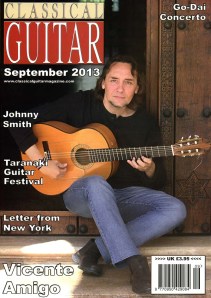 Tierra has been nominated for a Latin Grammy award in the ‘Best Flamenco Album‘ category. The winners of the 14th Latin Grammy Awards ceremony will be held on 21 November 2013 at the Mandalay Bay Hotel in Las Vegas.

Vicente Amigo’s first recording Di mi Corazon al Aire was released in 1991 and caused a lot of positive and negative response. It was a period of change and experimentation among young flamenco artists and Vicente Amigo was very much part of the Nuevo Flamenco movement. There is a lot of studio production of the sound of the instruments but the flamenco elements are so powerful and the musical ideas  communicate so directly that it is hard not to be seduced by it.