One of the earliest Spanish films, La Hija de Juan Simón, featured a number of prominent flamenco artists of the time: the flamenco singer, Angelillo, played the lead role of Ángel, with the flamenco dancer Carmen Amaya playing the part of Soledad and José Palanca playing the cantaor. 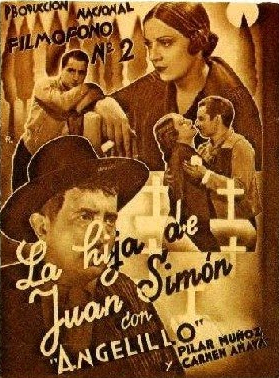 La Hija de Juan Simón was released in 1935 and directed by José Luis Sáenz de Heredia, and based on a play by Nemesio M. Sobrevila, who also wrote the screenplay.

Here is a short clip of Angelillo singing the theme from La Hija de Juan Simón, which is in the form of a milonga:

Angelillo, Ángel Sampedro Montero (1908–1973) was a very popular singer during the ópera flamenco era. He had a high falsetto voice, which one can appreciate in these films.

And the brilliant dancing and castanet-playing of Carmen Amaya:

José Palanca, José Lebrón López, (1904–1976) the cantaor, was born in Marchena, Seville. His reputation soon spread throughout Andalucia, where he was known for his very individual style in performing fandanguillos. Federico García Lorca described him as ‘el mejor fandanguillero de todas las épocas’ (the best fandanguillero of all time). Before the start of the Spanish Civil War in 1936, he toured Spain, often performing with Angelillo.

Luis Buñuel was the Executive Producer of La Hija de Juan Simón and also had a small part in the film.